The American Art Company is a commercial gallery situated in the heart of downtown Tacoma, Washington, a city which has undergone an arts and culture revival in the last few years.

The gallery is spacious. A good-sized entrance room opens up through a wide corridor to two large exhibit spaces. The wall art is floated about 6 inches out from the walls, so it has extra depth. In the back (primary) exhibit areas, the pieces are subtly grouped, often in threes, a larger piece having two slightly smaller ones on either side. The groupings in this exhibit area are set off by colorful, highly polished wood sculptures on pedestals between the groupings. 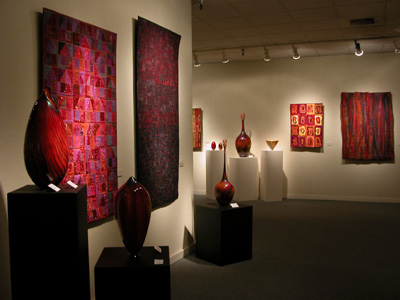 Ericksons’s “The Interview” should probably have been a painting, since the minimal quilting doesn’t enhance the image or the texture, but rather makes the piece hang awkwardly. Even as a painting, the Erickson piece was less effective than other of her animal pieces. 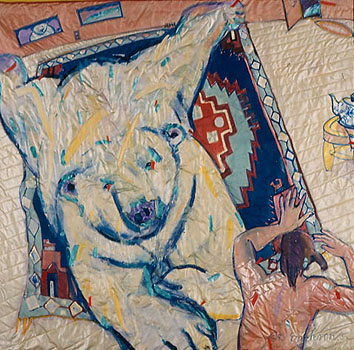 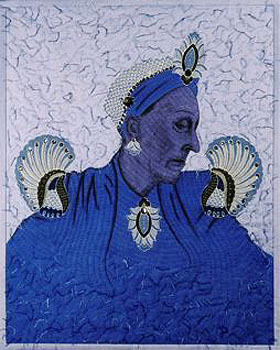 The Dorothy Ives’ piece, “Solitaire,” which looks interesting on the web site, is too busy for its poignant message to be read easily. The background obscures the figures. 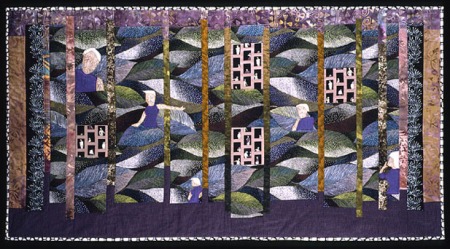 These three pieces, all of which feature stylized representational figures, are also the only ones in the exhibit which make direct comments on the contemporary world. The other piece in the room, Barbara Nepom’s “Leaves,” is bright and highly stylized, and its placement outside the main exhibit makes sense because of its coloration. 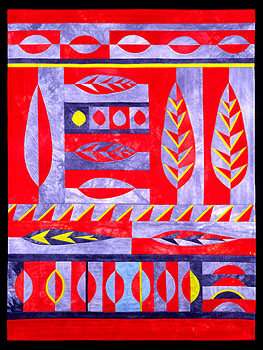 The larger body of the exhibit in the main galleries is also generally quite bright. Red tending toward rust dominates much of the art; the second most predominant color is chartreuse and lime green. However, the work is tasteful in its uses of the bright colors, and the presentation artful enough to make the pieces individualized, not blending into one another.

Janet Steadman’s “Again” and Janet Kurjan’s “Madrona” stood out as making excellent use of color modulations. A close second was Jeannette DeNicolas Meyer’s “Autumn.” Both Steadman and Meyer designed their colors to form a glowing spot within darker surrounds, which made the abstract imagery more flowing. 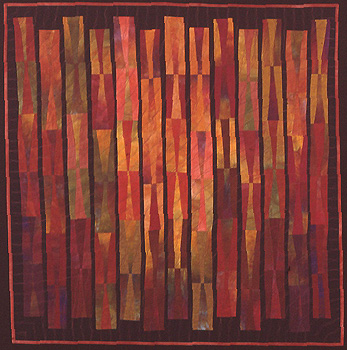 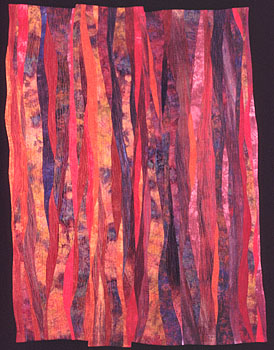 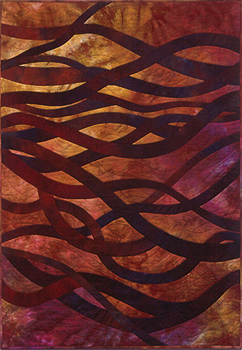 One piece which gathered accolades is Borg Hendrickson’s “Fences Two #9” It is intricate, yet cleanly designed; the placement of the strips into wedge shapes is important to the overall image; the black and white strips add a strong focal interest. 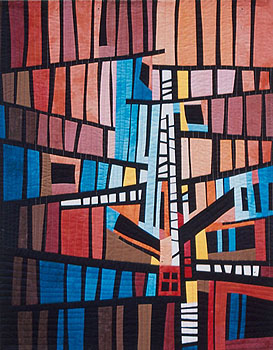 Cher Cartwright, who has three pieces in the exhibit, and whose “In the Course of the Motion” is the website signature piece, uses linear strips and swirls of energy radiating from circular forms. They are more modestly hued than the website images indicate but this does not diminish the success of the piece itself. Cory Volkert, whose “Kelp II” uses Sassaman-like forms, has a sophisticated surface of overlapping and echoing shapes. 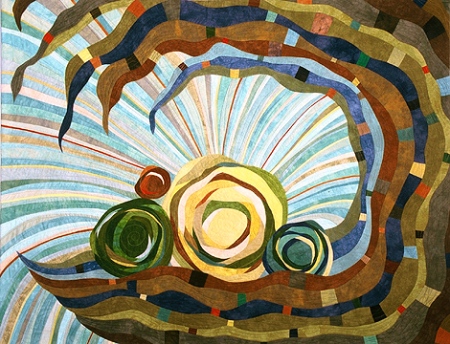 Cher Cartwright, In the Course of The Motion 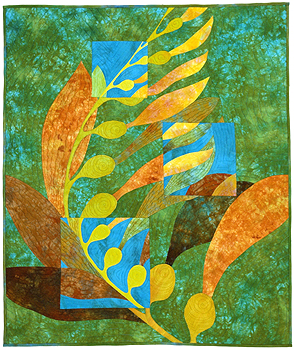 The piece that is top-notch is Toot Reid’s “Twenty.” Reid often has a seemingly simple schema in her work. She uses a background fabric in which the hue changes across its surface. On top of the background, she stitches raw edged 1 or 2 inch squares of another color. In this particular work, the background is red, and it is topped with small black squares stitched variously in black thread. The raw edges of the black fabric and the cut ends of the threads are left dangling as part of the design. The simplicity and starkness of the red and black combined with the variety among the black squares is most satisfying. The stitching is an important feature of this piece—adding a layer of design over the fabric layers that is like mysterious writing. 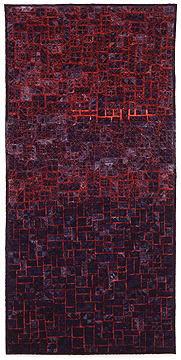 Abstract work dominates the exhibit although there are some natural images as well. The small representational floral pieces in the wide well-lit corridor between the front and the back of the gallery seem out of place in a high-end art venue. “Into the Woods, Autumn” by Bonnie Jean Thornton (which was sold) is particularly unsuccessful in its choice of fabrics and design. This particular mixture of organic and geometric shapes and hand-dyed and commercial representational fabric is jarring to the eye. The confusion of spatial distance is neither abstract nor realistic, so it adds to the problem of readability. 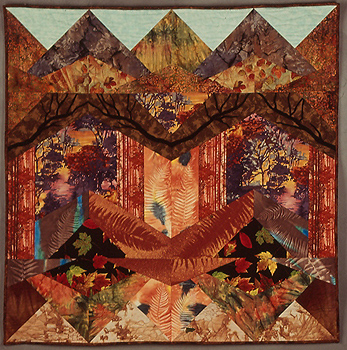 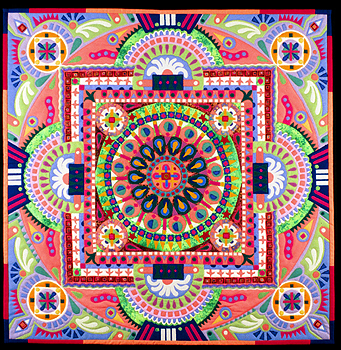 The pieces are mostly moderate (around 3’x 5’) in size, including Reid’s and Erickson’s which in the past have been much bigger. A couple of the pieces have titles which seemed provocative, but they are attached to unexceptional imagery. “Not Just Another Anita Bryant Day” by Cher Cartwright and “It’s not My Fault Line” by Bonnie Brewer are both technically competent, but the titles give them more content than the work justifies. 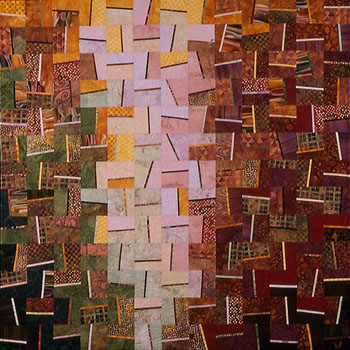 The exhibit is a well-hung, well-lit, beautifully paced commercial venture, with well-crafted, well-designed, mostly “good” pieces. The strongest critique is that, in the end, it is very safe. No one will be offended, and no one’s heart is going to beat faster upon encountering this art. This is art that can definitely go over anyone’s couch.

This is Tammy and Craig Radford’s second art quilt exhibit. They plan to continue the biennial show as an invitational. Some edgier, not-so-nice pieces might have set off the other pieces and extended the visual range as well as adding interest to a larger number of buyers.

The exhibit is up until November 18 and can be seen in its entirety on the website, www.americanartco.com. All photos, with the exception of the site view, are courtesy of the American Art Company.

This entry was posted on Thursday, November 9th, 2006 at 6:10 pm and is filed under Reviews. You can follow any responses to this entry through the RSS 2.0 feed. You can skip to the end and leave a response. Pinging is currently not allowed.